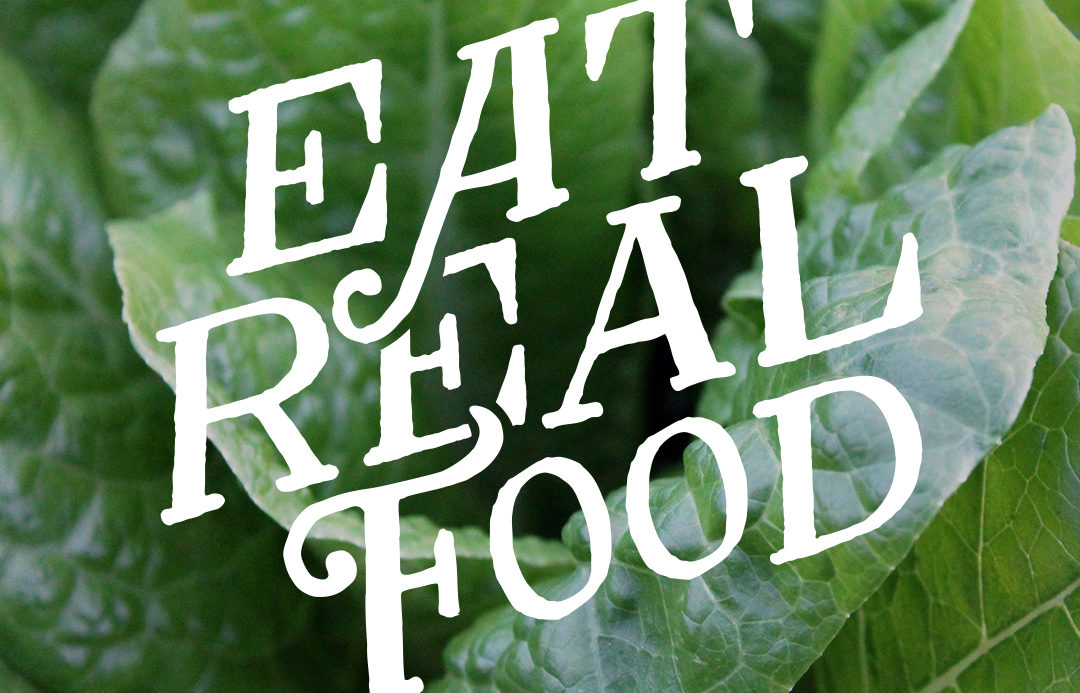 Hovey & Harrison has become a gathering place for Eagle County. Part wine bar, part coffee bar, part locally sourced market and restaurant, and part bakery, Hovey & Harrison is unlike anywhere else in the area; a place where locals and visitors alike can do everything from taking cooking classes to getting a quick grab-and-go meal to setting up a remote workspace. The business has breathed new life into the entire Edwards Corner neighborhood, and in doing so, already become inextricably woven into the fabric of the community in the two years since it opened.

But Hovey & Harrison was just a dream when Gretchen Hovey and Molly Harrison approached 970 Design.

Two local entrepreneurs who had become lynchpins in the local food scene over the years–Gretchen by running a fresh fruit stand and hosting catered, pop-up dinners throughout town, Molly as a phenomenal baker who also happened to run a side-hustle delivering prepped meals. They wanted to launch a concept unlike anything else in the Vail Valley–and entrusted 970 to handle the entirety of their branding from concept to completion. Heck, we even ran a successful Kickstarter to get them there.

We hustle here at 970, and we love when we get to work with clients who have that same self-starter attitude. So when it came to naming discovery, the process was simple: Gretchen and Molly had already established sterling reputations within the local food scene through their own blood, sweat, and tears. The names of these two entrepreneurial, hardworking women already carried weight around town; why erase that by getting cute with a name? So, Hovey & Harrison was born.

From there, we went to establishing a logo that belied the company’s mission–delivering clean, healthy, locally sourced artisanal food and produce to the masses. The typeface and signage we made was clean and impactful–empowering the names of the business owners just as they had strengthened the community for years with their food–and flourished with an ampersand designed to mimic the warm braids of a fresh loaf of cardamom bread.

Color palette creation followed a similar trajectory–honey hues sweeter than ripened cantaloupe accented by strong, metal tones akin to bakeware and kitchen utensils Gretchen and Molly use to create their masterpieces. And to sum it all up, a tagline that neatly summated the entirety of their ethos into three simple words: Eat Real Food.

Gretchen’s career began going to farmers markets and bringing fresh fruit from across the state back to Vail Valley. With H&H’s market being one of its biggest market differentiators, we created branded tote bags so customers could stop by and grab a loaf of bread and fresh produce for home without creating more waste. 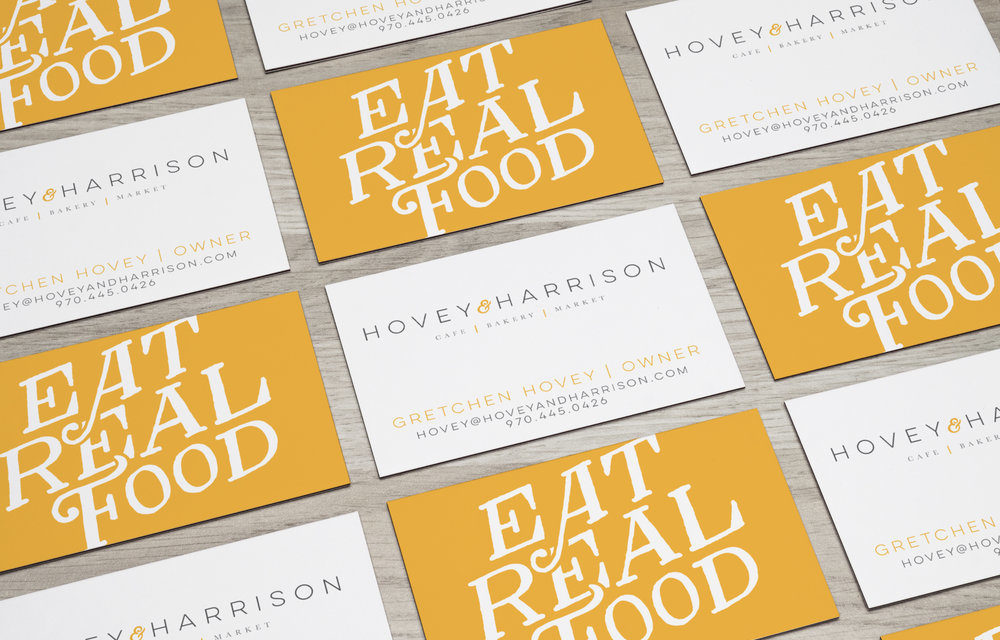 Gretchen and Molly had an established client base for their businesses. Now, it was time to inform those customers they had unified in a way that wasn’t offputting and would encourage them to stop by. Business cards bearing their tagline accomplished that. 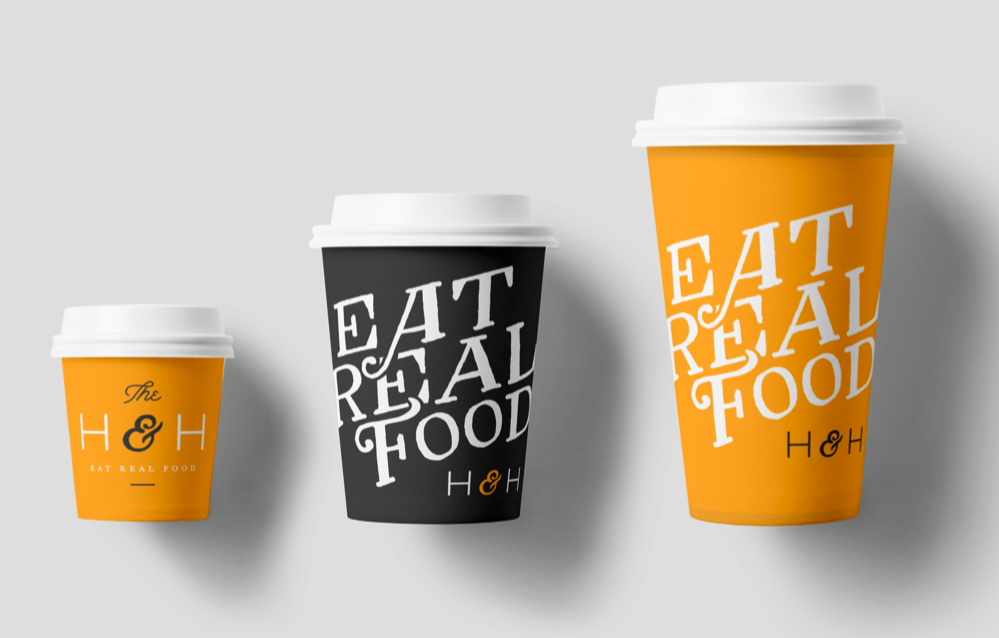 If you want to spread brand recognition, you can’t simply put signage up and hope people drive past: you have to get creative. Multi-colored, to-go coffee cups were created emblazoned with H&H’s tagline to catch the eyes of–and start conversations with–the friends, family members, and coworkers of H&H customers who grabbed some coffee on the go. 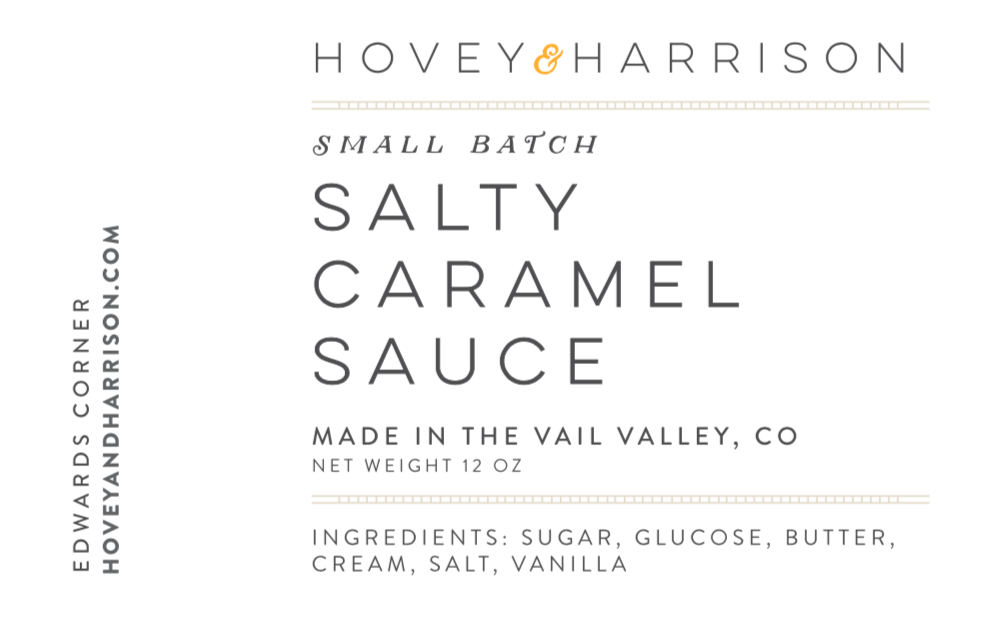 Hovey & Harrison is all about eating real food, so when it came to packaging, we kept it simple and made sure to call attention to the straightforward ingredient list so that buyers knew H&H paid attention to what was going into their products. 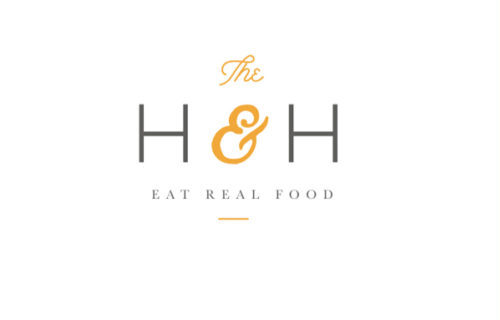 We created additional marketing materials to establish “The H&H” as an identity so our brand didn’t sound too law office-y. Now, when someone in the Vail Valley says they’re grabbing a quick bite at The H&H, everyone knows what they’re talking about.

All the cool fonts, creative swag, and intelligent website design doesn’t mean a thing for a business that–by nature–requires its customers to walk through its doors if the storefront itself isn’t perfectly inviting. And that’s particularly true when trying to start a business in a traditionally “cursed” retail space that has turned over multiple times in a short time period like the spot H&H now occupies had.

So we designed a retail space that would make people not only want to come through the doors, but stay a while at Hovey & Harrison. Exposed brick channeled the tenacity of the namesake co-founders, while polished wood harkened to their artisanship. We even created giant pull-down, wall-mounted food menus that ended up winning an award from Art of the Menu for best menu design.

And then, for when the new happy customers went home from Hovey & Harrison to tell their friends about what an awesome time they had there, we created a website that showcased the totality of everything offered by H&H from cooking classes to the grab-and-go counter to private event catering.

We’re ecstatic with the job we did for H&H, but it has, unfortunately, come at a price: The location is now so popular, even the team at 970 sometimes can’t snag an open seat anymore! 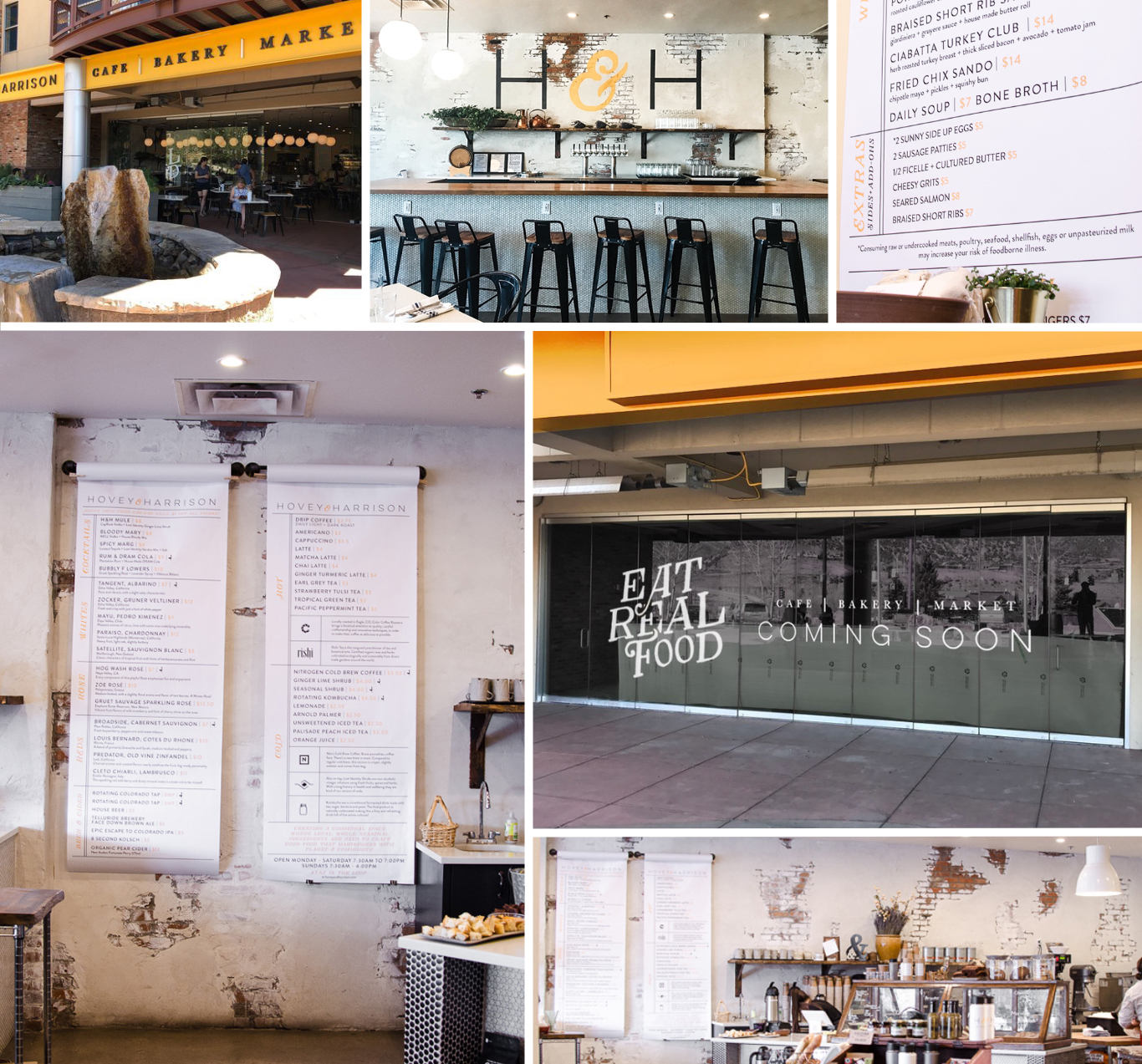 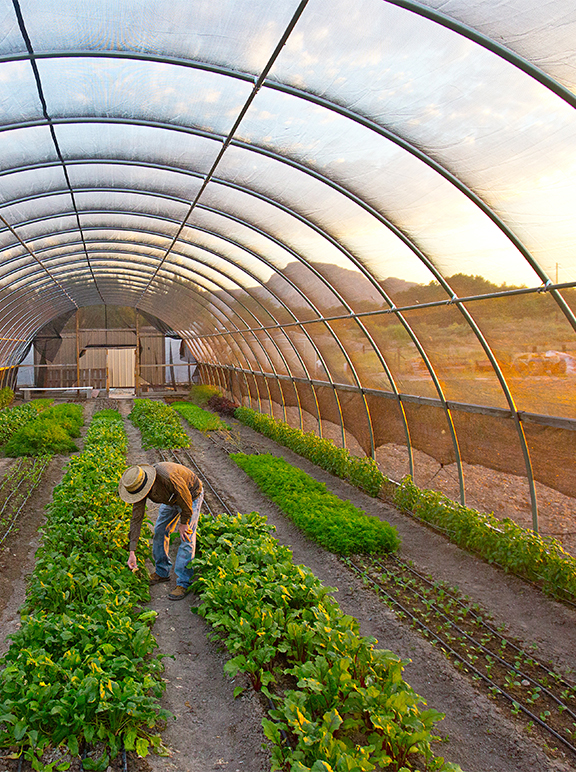 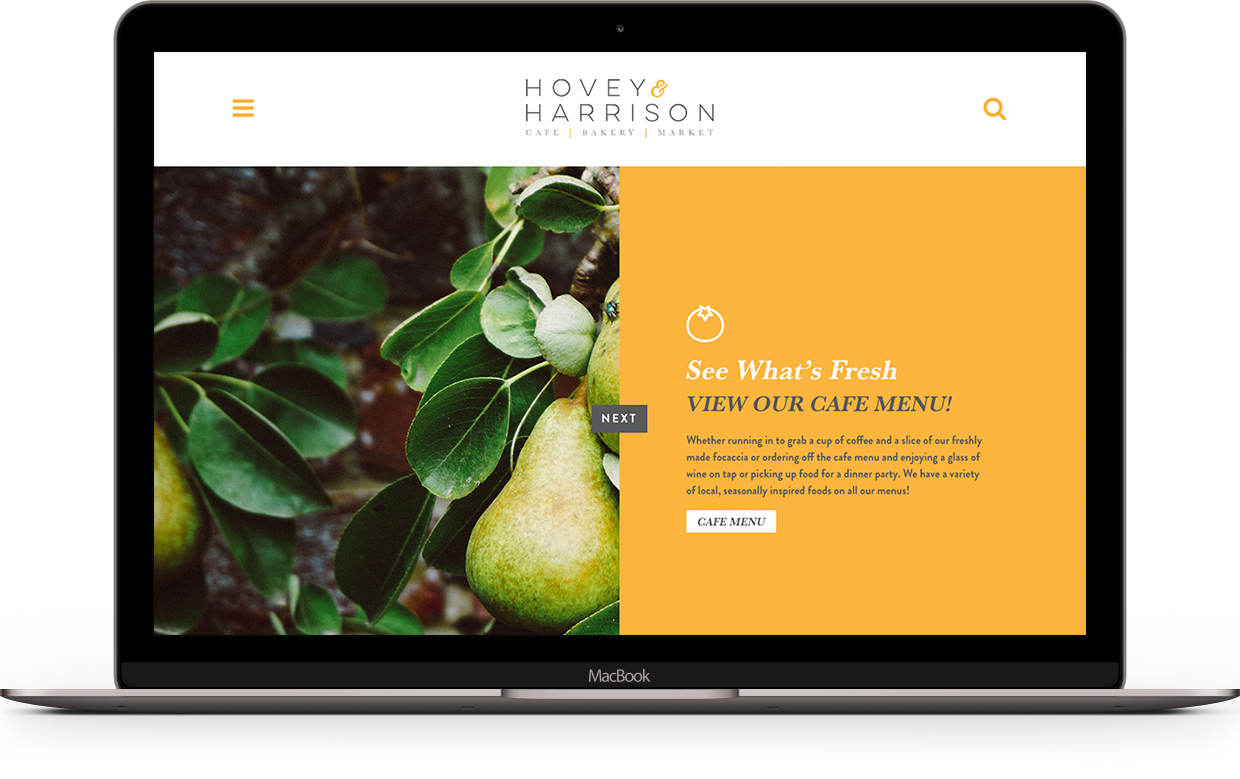 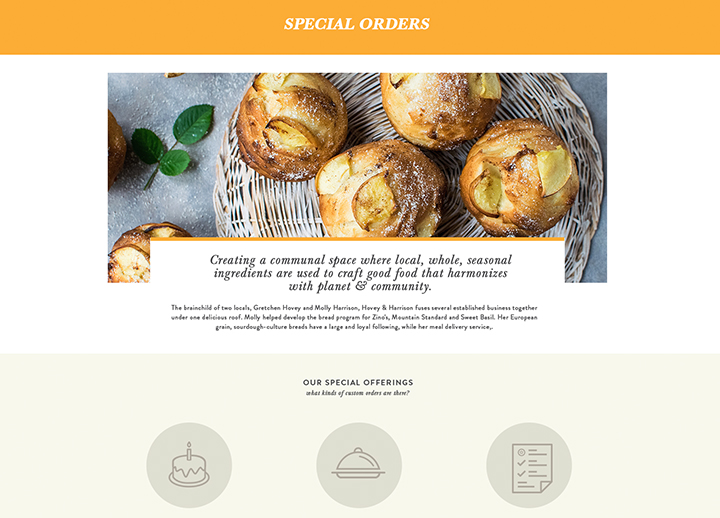 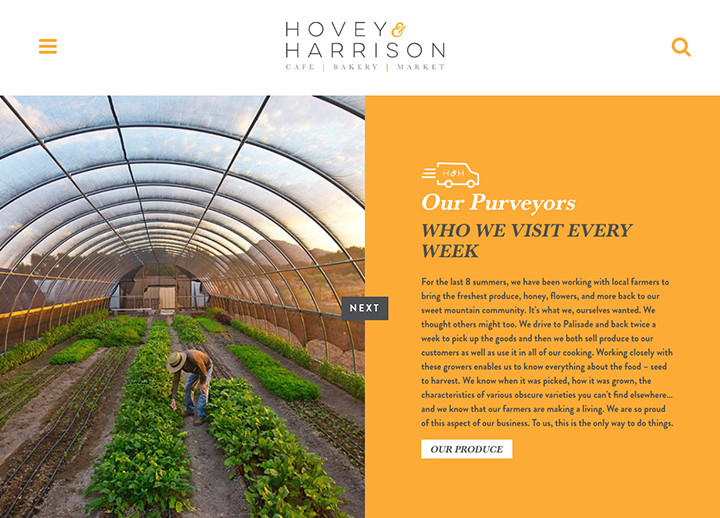 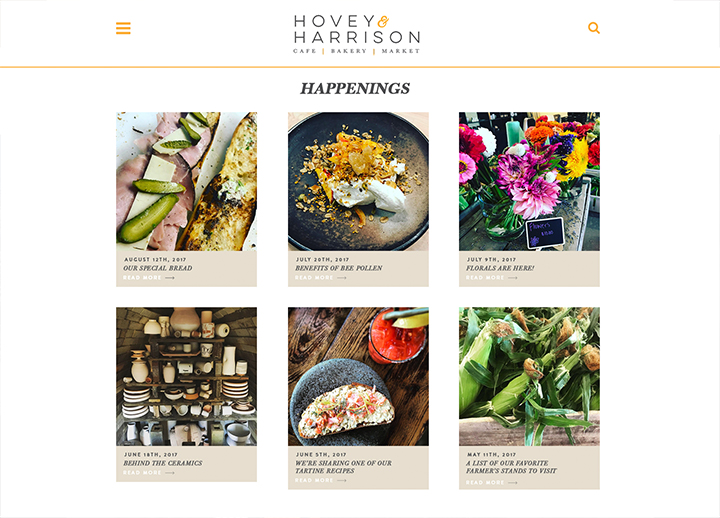 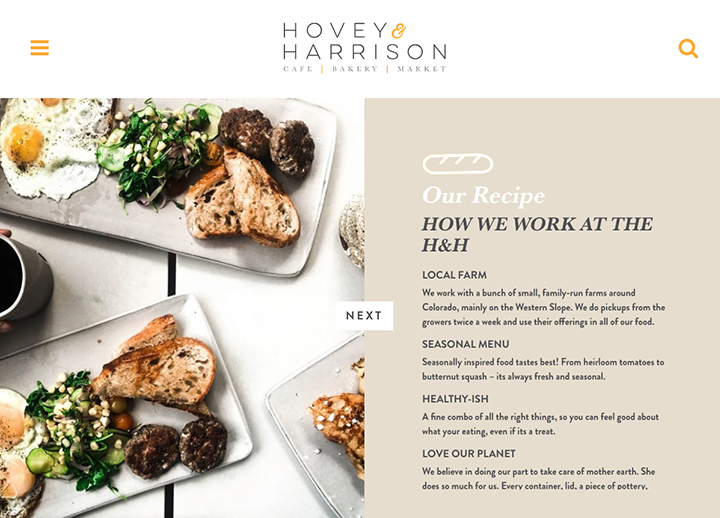 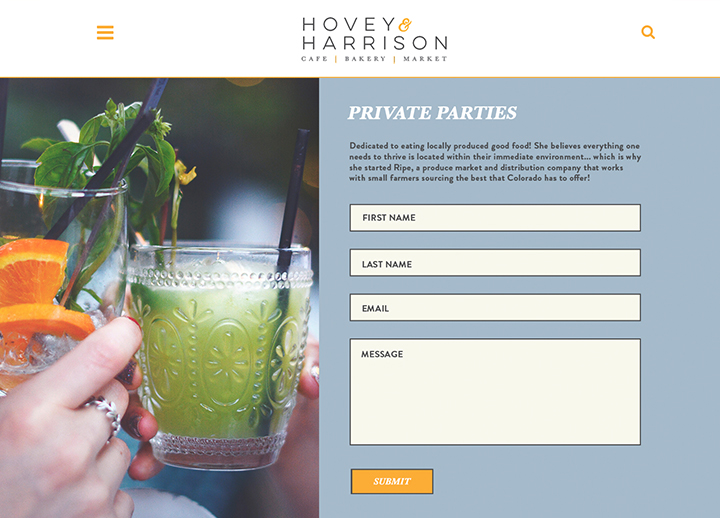 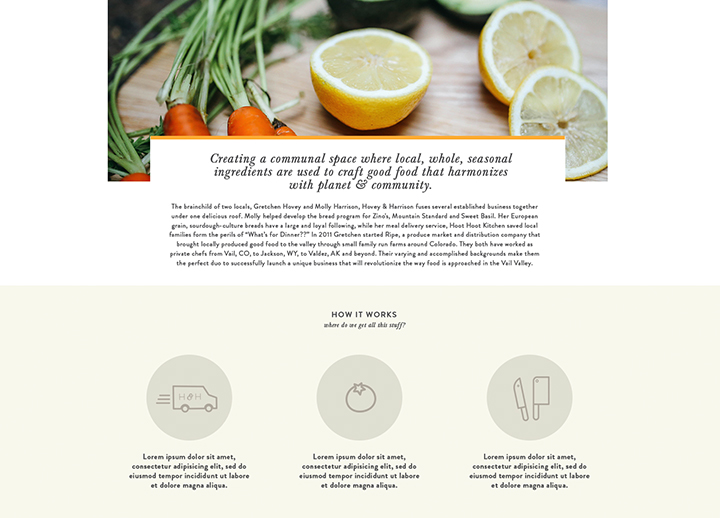 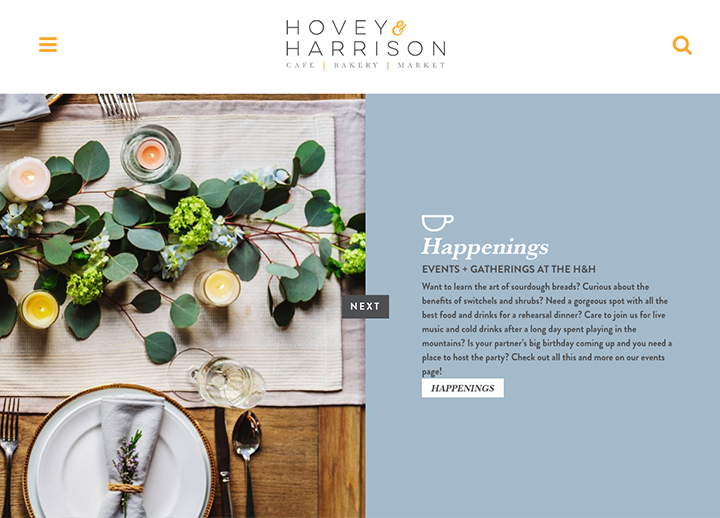